A traumatic brain injury (TBI) can develop due to a bump, blow, or jolt to the head. It may also occur following a penetrating head injury, disrupting functions of the brain. The severity of a TBI can range from mild to severe. 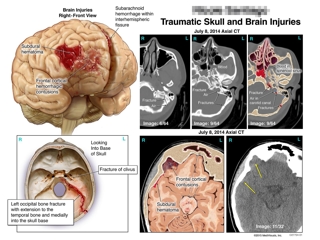 Each year, TBIs are responsible for a substantial number of deaths and cases of permanent disability. According to a report by the Center for Disease Control, estimates indicate that between 3.2 million and 5.3 million persons in the U.S. are living with a TBI disability. Additionally, adolescents and adults who are affected by moderate / severe TBI and discharged from rehabilitation facilities were more than twice as likely to die 3.5 years after their injury. Published, peer-reviewed literature indicates that 2 in 10 adolescents and adults who are treated for TBI and receive rehabilitation therapy will die within 5 years post-injury and nearly 4 in 10 will have declined in function from the level of recovery attained 1 to 2 years after their injury. 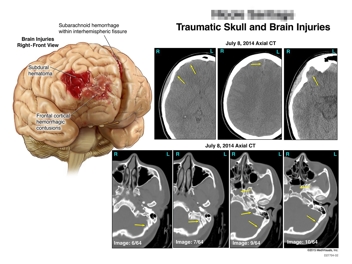 TBIs don’t just occur in car wrecks or skiing accidents. Studies show that an estimated 300,000 traumatic brain injuries occur annually in the United States due to high school and collegiate sports injuries. In 2014, a study presented at the American Academy of Neurology demonstrated that more than 40 percent of retired National Football League players had signs of TBI based on MRI scans called Diffusion Tensor Imaging. Other studies have indicated that chronic traumatic encephalopathy (CTE), a condition only verifiable on autopsy, was present in 96% of NFL players examined.

In April of 2015, the United States District Court for the Eastern District of Pennsylvania approved the settlement between the NFL and retired players. The lawsuit alleged that the NFL failed to warn players and hid the risk of brain injuries they faced. In July of 2016, a group of NFL players sued Riddell, Inc. alleging the equipment manufacturer failed to warn about the long-term health effects their helmets could not protect them from.

Lifetime Costs of a Brain Injury

The brain is an incredibly important part of the body, but it is also extremely delicate, meaning even a slight amount of damage can lead to long recovery times and possibly permanent consequences physically, emotionally, and even financially. These costs are why you should discuss your case further with a Dallas personal injury attorney when you or a loved one suffer from a TBI.

The financial costs of a brain injury are perhaps the easiest to comprehend, but also probably the hardest to calculate. Brain injuries are unique in that it’s almost impossible to diagnose their true nature. How severe is it? What impact will it have in the short term, as well as the long term? Will you ever fully recover? Will there be any lasting side effects? Each of these questions could have an impact on the financial damages sustained through this injury.

Medical care is the first cost you incur as part of your TBI. Brain scans, examinations, and continual procedures needed to properly treat a brain injury add up quickly, particularly because much of the technology used to treat brain injuries is still new and cutting-edge, involving highly-sophisticated equipment. It’s easy to run up large medical expenses in this way, particularly if you’re going to need continual treatment for months or even years after the injury initially occurs. By some measures, the lifetime costs of treatment for a TBI are estimated to vary anywhere between $85,000 for a mild issue and $3 million for a more serious condition.

The second-largest cost is the earnings you have missed out on as a result of your injury. Suffering a TBI often means you have to miss work, losing out on potential income you could use to pay your bills, care for your family, and continue to live. This is also fairly easy to calculate, based on your wages and the amount of time you missed.

Brain injuries have been shown to have a number of other effects and consequences as well. The unemployment rate for average adults two years after their diagnosis is 60 percent. People who suffer from brain injuries may lose the ability to work in the same capacity as they did previously, meaning they may never be able to return to work again. This can substantially complicate your case and dramatically increase the cost of the injury.

A TBI also has other costs that do not necessarily have a financial value but could make you eligible for financial compensation. Pain and suffering and emotional trauma are two of the largest costs of TBI, as they often lead to turmoil physically and emotionally.

TBIs also can lead to other side effects, such as mood swings or changes in personality, which can have a dramatic impact on your relationships with everyone from your spouse to your kids to your co-workers. Sometimes a brain injury can lead to these relationships eroding for one reason or another until they collapse, resulting in a loss of companionship or consort.

Handling cases involving TBIs requires an understanding of the evolving medical science as well as sophisticated neuroimaging. Recent technological and neuroscience developments have made it possible to be able to quantify brain injuries to such a degree that juries no longer have to infer from neuropsychological testing whether or not a person has a significant brain injury. Diffusion Tensor Imaging (DTI) and fractional anisotropy (FA) have enabled neuroradiologists and neurologists the ability to identify and quantify abnormal patterns within the brain that when paired with a history of trauma, can help to establish the existence of a brain injury.

Need to discuss your case with a Dallas TBI attorney? Call (844) 297-8898. We have handled ample amounts of personal injury cases.